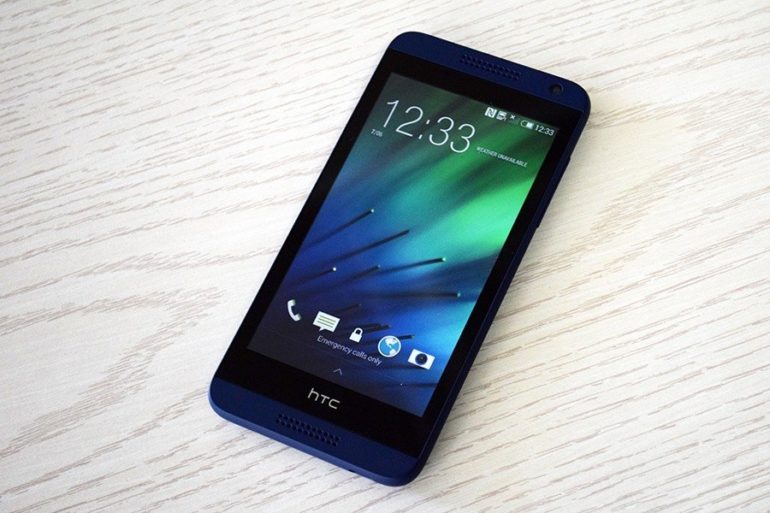 The device is said to be the lighter as well as cheaper version of the flagship smartphone, HTC One M8. Again, HTC opts for a plastic body over aluminum to reduce the overall price of the gadget.

If we compare the HTC One M8 with iPhone 5S, then definitely HTC Desire 610 is launched to battle with the cheaper version of Apple Smartphone line up, the iPhone 5C. Both the companies have followed the same idea to use a plastic body instead of aluminum for their cheap and budget smartphones.

Although it’s plastic make, the device feels very firm and could easily withstand a few scratches. HTC Desire 610 is available in there attractive colors such as Red, White and Dark Blue. The device is very light weighing only 143.5 grams. It has a length of 143.1 mm, width of 70 mm and depth of 9.6 mm that makes it easy and light to grip the phone in hand.

HTC Desire 610 offers a 4.7-inch touchscreen display with a qHD resolution of 960×540 pixels. The device may not feature a great display at a pixel density of just 234 ppi but it’s well enough for any device at that price.

Because of its low resolution screen, the images or videos would look a little sandy when compared with the screen display of some of the high-end devices like iPhone 5S, Samsung Galaxy S5 or HTC’s own HTC One M8. In spite of offering a 4.7-inch display, the gadget is a full 1mm taller than Samsung Galaxy S5 which has a display of 5.1-inch while it is almost 10mm taller than the 4.7-inch Google Nexus 4. Hence, the device is much larger than it ought to be.

The reason for this unnecessary few mm increase in length is because of the BoomSound speakers installed both above and below the screen just as it is done on HTC One M8, offering great sound quality when compared to other smartphones in the mid-range smartphone market.

Although it lacks many features, the HTC Desire 610 scores pretty much average with an 8 MP rear camera and a 1.3 MP front facing camera for video calls which is quite a jackpot for users in the mid-range smartphone market. Unfortunately, the camera doesn’t have the feature of uFocus (found in HTC One M8) that helps you change the focal point once you have clicked the photo.

Yet, the image quality is pretty much decent offering accurate colors and thorough detailing of each picture. The device also offers a feature called Selfie mode just like the HTC Desire 816 where you can pose as well as pap away at yourself without any need of turning the camera around.

It can also record videos at 1080p resolution offering clear and sharp picture quality as the output.

HTC Desire 610 is powered by a 1.2GHz quad-core Qualcomm Snapdragon 400 processor and a 1GB RAM. With such a powerful assembly, the device performs pretty well during high definition videos or graphical games, slowing down only during the most intense period of actions, while most of the time these games run without any trouble.

Equipped with a battery of 2040 mAh, HTC claims that HTC Desire 610 offers 16 hours talk time over 3G and 650 hours on standby mode. Hence, it can last for a day without the need of charging while you browse the web, watch videos alongside a few calls or chats.

HTC Desire 610 is a mid-range smartphone yet offers all the connectivity options available on any high-end device such as Wi-Fi, Bluetooth 4.0 with A2DP, 3G, 4G, USB 2.0 and NFC.

Our verdict is about the HTC Desire 610 is pretty much positive as it’s one of the best device in the price range. In fact, the device offers an all-round set of features that includes large screen, fast performance for basic tasks etc. On the contrary, there are pretty much better and cheaper options in the likes of Motorola’s Moto E and Nokia Lumia 630, if you don’t want the extra features such as bigger screen, LTE and 4G.