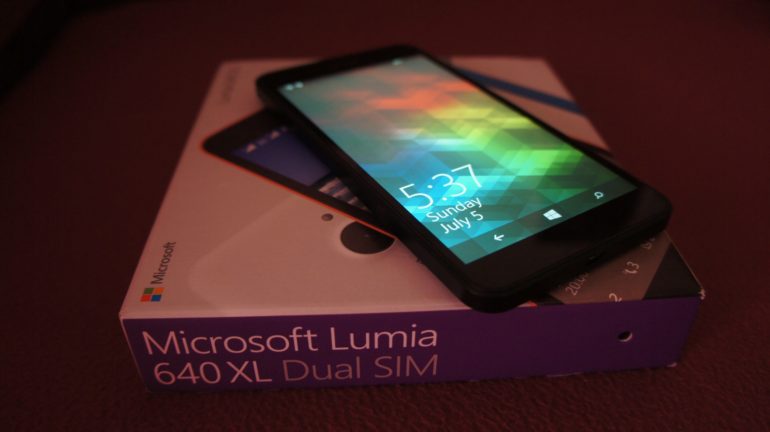 Microsoft in 2013 acquired Nokia’s mobile phone business and thus even got their hands on the Lumia range of devices which Nokia had produced and marketed. Not changing anything drastically Microsoft continued to build on the revenue already generated by the Lumia’s out there by releasing some more of them on different spec levels and price ranges. The new 640XL was one those that was released in the 1st quarter of this year and aimed at the mid range market.

We got our hands on this phone and have given our opinion below:

The device in itself looks quite good with a uni-body style. In its black matte finish avatar it actually looks better than probably a 1st glance towards the device. The screen size being a good 5.7 inches big makes it an addition to the few 5.5 inches and above screen size phones in the market.Ports wise there are the 3.5mm Headphone jack and the micro USB charging port. 2 hardware buttons only on the device and rest all is touch oriented.

The Sim and SD card slot was at the back under the black matte part of the phone which comes off as a whole like a snap-on phone case.

The only issue design wise will be for those who people who have small hands so this big screen will be hard to handle using one hand. Also because of its big size nature of this device the weight feels slightly more than the 171g that is officially listed.

Performance wise it’s fitted with a 1GB RAM and 8GB internal memory which is quite standard in the market and also has the Snapdragon 400 processor quad-core 1.2 GHz.

The Operating System is a Windows 8.1 with the Lumia Denim which allows better speed and capability of playing 4K video on the device. Scrolling and response is quite good.

Downside is that it could have had a 2GB RAM and 16GB internal memory but the SD card slot more than makes up for 8GB rating.

Apart from that it’s not a 4G device even though it released in March of this year which is probably a bit of a letdown and also has the latest Bluetooth 4.0 version.

Battery is 3000 mAh strong and replaceable which is quite good for this kind of device and there is no doubts that it will last quite long on moderate use and with power saving features and auto brightness, it will easily last about 1 and a half day.

A more stressed out usage with Bluetooth and 3G and 100% brightness will still make the phone last about more than 8 hours easily.

The cameras of the phone stand at 13MP back and 5 MP front which is quite good stats for this device. On usage of these cameras they are not really up-to the mark. In low light the picture quality was not what is expected from a 13MP camera. There was a lot of noise in the pictures and colors were all faded. Also the lighting took a major hit since the sensor couldn’t adjust properly to the requirement which resulted in the above two issues.

Also when trying to use manual controls not all controls give a visual adjusted feedback but they do get adjusted and it’s only known once the photo is taken. White balance and focus is the only thing giving visual feedback while aperture and shutter adjustments only take effect and get shown after the photo is taken.

As far as the sound is concerned it has two speakers (one each front and back). The sound quality is not too bad but the volume is quite less. Phones nowadays come fitted with very good audio hardware and software and this phone has stock audio.

A 5.7 inch display and 720p quality means it’s a quite average display rating. The colors on the menu don’t tell the whole story anyways and even though the Lumia Denim firmware allows for a 4K playback this display will not be able to give the 4K output as desired due to its 720p nature.

Downside is that I would have probably liked the device to be a 1080p resolution device.

To sum up the review I will first start off with the pricing. The unit that we got was the 3G version which is sold at 800 Dhs in the market. Now in that range of price we can get a number of other phones either in Windows, Android and even Blackberry. While this phone has a big size and good battery it does fall short in some specs but that is because this isn’t a top of the range flagship device. 800 dhs becomes a good price especially when the specs are taken into account and for a mid range device this one does perform well enough. If you want to have a windows phone without 4G and a good battery while also a big screen then this one fits the bill quite nicely.