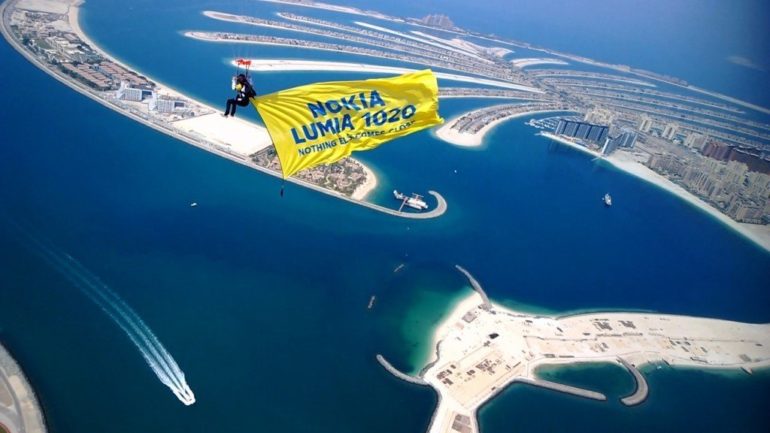 Nokia Middle East marked the arrival of its highly anticipated smartphone, the Lumia 1020, with a skydive airdrop of the first consignment of the phone, arriving literally, from the sky. Representatives from Nokia, the press and a select number of imaging enthusiasts, skydived onto Palm Jumeirah with Nokia Lumia 1020 mounted on their headgears.

Featuring the second generation 41 megapixel imaging sensor, Nokia Lumia 1020 removes the complexity of photography while enhancing the creativity of imaging enthusiasts in the way they shoot, edit and share pictures. The smart phone will go on sale to the public for the first time in the Middle East region at Dubai’s Gitex Shopper on October 5th.

Participating in the skydive stunt, Tom Farrell, Vice President, Nokia Middle East said, “Sky is literally the limit for imaging enthusiasts with the Nokia Lumia 1020. This activity clearly demonstrates that Nokia Lumia 1020 will bring a new dimension to the art of capturing life’s moments anyplace, anytime and anywhere for consumers in the region.”

Unlike any smartphone in the market today, the Nokia Lumia 1020 reinvents zoom, enabling consumers in the region to discover more detail than the eye can see. With Nokia’s innovative PureView technology, including optical image stabilization, the device is able to produce some of the sharpest images possible by any digital camera.

Either before a picture is taken or after it has been shot, the zoom capability enables people to discover and then rediscover the personal stories each image can tell. With a beautiful interface that visually demonstrates how settings will affect the final photo or video, Nokia Pro Camera makes it easier than ever to capture, edit and share photos and videos with unrivaled clarity.