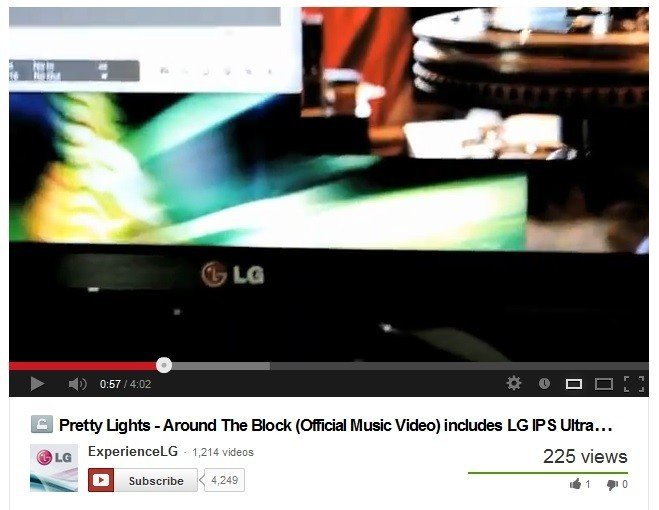 LG COLLABORATES WITH PRETTY LIGHTS ON MUSIC VIDEO “AROUND THE BLOCK”

“We’re quite pleased with the music video by DJ Pretty Lights which demonstrates the exceptional multitasking functionality of our uniquely proportioned monitors,” said Il-geun Kwon, vice president of the LG Electronics IT Business Unit. “Well suited to the needs of recording artists, sound engineers and producers, the UltraWide has enough screen real estate to display mixing software, editing tools, multimedia files and a browser at the same time.”

The music video brings Smith’s artistic vision for Around the Block to life through the use of LG’s UltraWide monitors. The concept of the video is the symbiosis between man and machine, or more specifically, between Smith and his UltraWide monitors. With expansive screens and enhanced multitasking features, these monitors are an ideal match for Smith’s unique, experimental approach to creating music and video.

“LG has an amazing product in the IPS monitor and we felt the most effective way to highlight it’s features was to show it being used in a situation our viewers could relate to,” said Kevin McKeon, chief creative officer , at Strawberryfrog. “Pretty Lights is a master of his craft and seeing him create music and multi-task on the monitor was the most inspirational way of telling the story.”

The UltraWide monitor is an excellent tool for the digital environment, helping artists to perfect their beats and realize their creative vision. The monitor’s 29-inch, 21:9 aspect ratio screen enables users to view and work on several open programs at the same time, making it easy to mix, edit and create. Conveniently, the 4-Screen Split feature divides the display into four segments, which can be arranged into a variety of useful configurations with just a few mouse clicks.

Moreover, the Dual Link-Up function caters to the multi-device requirements of today’s digitally savvy artists. The feature enables users to simultaneously connect two separate devices — such as a sound mixer and a recording device — to the monitor. A clever efficiency booster, the Dual Link-Up helps to facilitate the flow of creative production.

Around the Block will be released on the album A Color Map of the Sun. Pretty Lights’ fans can pre-order it now on CD, vinyl, or in digital format from the official website.