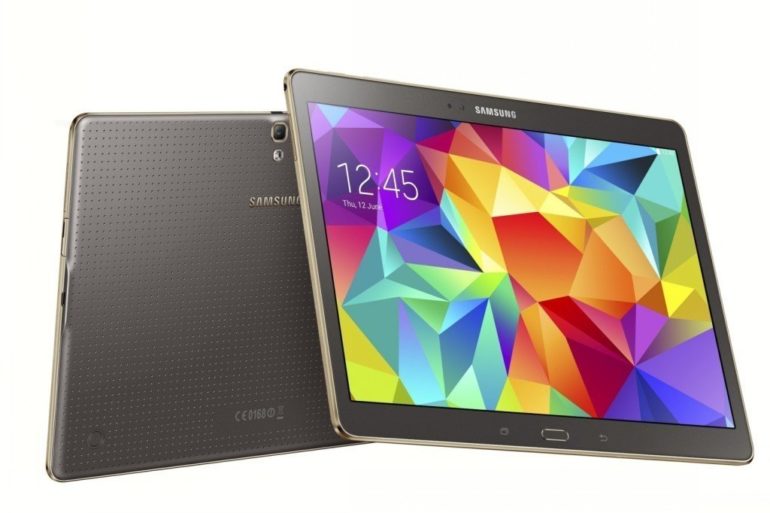 Samsung is upping its ante in the tablet market nowadays with the introduction of new tablets almost every month. Galaxy Tab S is a brand new tablet that hopes to bring Samsung on par with Apple in the huge tablet market dominated by Apple’s iPads.
Let’s see what the new tablet has to offer:
Design, Look and Feel
Being a 10 inch tablet, the tablet is surprisingly very lightweight and compact. It seems like it is the thinnest 10 incher tablet but feels very solid. It has faux leather back and fake stitching that’s pretty common with the galaxy phones recently launched by Samsung. The bezels have ample space for a good hold. Though it can be very tedious to type holding the tablet in hands, though it will be easier for those with larger hands. Home button and the capacitive buttons are placed on the bottom bezel of the tablet. The slot for micro SD is on the left edge whereas the power button and the volume rocker are placed on the top edge of the tablet. Along with the headphone jack around the left corner, an IR blaster has been located in the center of the top edge. Dual-stereo speakers are located on the top left and right edges. Overall the tablet looks and feels premium in all respect, PERIOD.

Display and Features
Samsung Galaxy Tab S boasts a 10.1 inch super AMOLED display with a resolution of 1560 x 1600 giving it a pixel density of 299 ppi which gives it an edge to the Apple’s iPad Air having a pixel density of 264 ppi. Having such a huge AMOLED display, it seems that it’s screaming for attention. The tablet has richly saturated colors along with a super sharp resolution; it makes the experience very neat and immersive enhanced by the interactive touchscreen. Overall the screen offers a bright, pleasant viewing experience and also a lot less strenuous on the eyes.
The Tablet ships with the Android 4.4.2 skinned with the Samsung’s Touch Wiz interface. It also features Samsung’s new Magazine UX which separated the home screen that sports a Windows 8 like tile interface. You have an option for having a widget cover the whole screen. The latest Touch Wiz id pretty useful and has a lot of options in the settings menu which are very neatly organized. The Pro version of the tablet also features many free apps focused on the business users. Also the IR blaster can be used to control your television as a remote control.

Camera and Internal Storage
It has an 8MP camera with a 1080p video recording capability. Normally a camera isn’t supposed to take great photos or record videos; Galaxy Tab S isn’t an exception. Though the camera is pretty decent. It can’t rival a DSLR or a smartphone, though the stills and the videos can be rated as satisfactory. Overall, if you want to use the camera on this tablet, it’d do a pretty decent job. Also the 2MP front camera is decent for a good Skype call.
Samsung gives you an option to buy 16/32 GB of internal storage. Along with that, it has a micro SD slot which can expand your tablet’s memory up to 64 GB which will be more than enough for storing tones of movies.

Processor and Battery
It possesses an Exynos 5 Octa 5420 processor having a Quad core 1.9 GHz Cortex A15 plus a 1.3 GHz Cortex A7. It may seem like a lot of power, but it isn’t. it would work really well, until there aren’t enough apps opened in the background. Performance of the octa core processor significantly lags when many apps are opened in the background. Though multi-window feature is one of the most useful features on the tablet. Though we aren’t very much impressed with the performance, it’s supposed to work like a charm with the new Samsung octa core but it doesn’t.
It sports a large 8220 mAh battery which performs pretty well and would run for 11-12 hours continuously but under the condition that no high performance apps are running in the background. Overall the battery performance is pretty good and the battery life is on par with the new Apple iPad Air.
Connectivity
It comes in the options on WiFi only or the 4G option which is a decent pick. Along with that it has all other basic connectivity options like GPS with GLONASS, accelerometer, WiFi 801.22 a/b/g/n/ac etc.