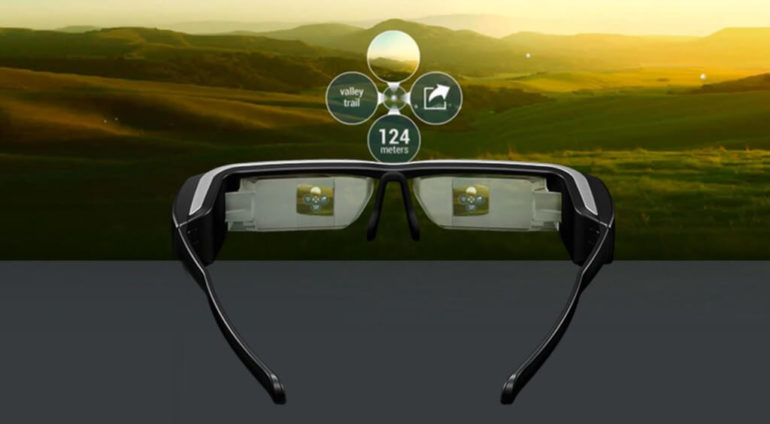 The end of 2015 saw a lot of virtual reality devices come to the fore, and though there’s still a long way to go before they actually get a place of honour amongst the consumers, they are still pieces of tech which are fun to use, and experiment with. While most other types of wearable tech have been adopted, the most prominent being the smartwatch, the augmented reality devices are the ones which will eventually marry all the various aspects of technology into one sleek package. As of today, the virtual reality headsets which are available in the market cost a fortune( around $1000 or more ), but that doesn’t stop tech enthusiasts from breaking their budget, to get their hands on this truly inspiring piece of technology. So, taking the theme of augmented reality forward, the device I will take you through today is Epson’s very own take on the upcoming trend. the Moverio BT200.

The Moverio BT200 ( lets just stick to BT200 for now ) , is not exactly the most beautifully designed virtual reality headset, but at a seemingly reasonable $699.99, it offers more theoretical functionality, and great value, for both Enterprise and Educational applications.

The BT200 was first unveiled at the CES event last year, and a full year has gone after that, but the device is still as experimental as it was when it first came to be. While major players like Google glass have slowly stated trickling in to the market, Epson seem to want to wait out the storm, and hit the market with a virtual reality device, that is truly ready for general consumer usage. That said. if you still want to give the BT200 a swing in its current developmental state, its on offer directly through Epson, so you might want to try there.

When Google Glass gave its first public appearance, the crowd was awe inspired by its rather unobstrusive design language. The folks at Epson though, had other plans. While the BT200 device itself is on the chunkier side of things, it is undoubtedly, a pair of super high tech glasses. Whats more, the thick frame, and tinted front filters, makes the BT200 look a lot more like those fancy pieces of tech you saw in old Sci-Fi flicks. That said, the BT200 doesn’t allow its rather clunk frame to interfere in its functionality. While Google Glass has lenses covering only the side of your right eye, the BT200 features lenses which sit right in front of both eyes. This way, any image you are seeing through the glasses fall on the center of your vision, rather than on just one side, thus making any use of the BT200 hassle free and pleasing to the eyes.

As I mentioned earlier, the BT200 is truly still an experimental device, and that is made clear, when you see that it features next to zero adjustment tools provided on the device. What Epson has done to give the customers a bit of a respite, is that they have made the nose guard bendable , the plastic arms flexible, and also included a set of removable rubber stabilizer fins, which you can place on the arms. All this makes sure that the BT200 does not fall off your face every now and then. Rather, you will find that these quick fixes provided by Epson, actually do a pretty decent job overall. Another modification that you can do to the BT200, is that you can replace the in-house light filter, with a darker one, in case you want a more immersive experience. You can even remove the filter entirely if you so desire, and don’t worry, the BT200 will not expose what you are watching, to the outside world, even in this scenario.
What I did find is that, when the BT200 is not in use , the outer curved projection lenses look slightly blurry, but rest assured, the inner glass and filters are transparent enough to help you look at what is in front of you.

Coming to the innards of the BT200, we can see for one, that Epson has not made the device an autonomous device like the Google Glass. Rather, the BT200 depends on a wired controller device for its working. Basically, what we have is a smartphone sized block that features a trackpad, and the standard set Android control buttons, connected to the side of the BT200 device using a 30 pin connector. Yes, it all does sound very bulky, but then again, this is only the Beta version of the device , and hopefully, the final consumer version which comes will feature a more autonomous device.

Moving on, the BT200 can project 960 X 540 resolution picture over both eyes, creating an amazing stereoscopic image which is equivalent to an 80 inch screen viewed from a nice 15-16 feet away. Tech geeks will notice that the resolution of each image almost identical to the one rendered by the Playstation Vita console, while the combined effect of both the images is equivalent to a Full HD 1080p display. The display goes on to offer 24 bit colour, which is punchy, even when you use the lighter filter, or no filter, if you are interested in that experience.

The aforementioned control box runs Android 4.0, and features a very down to earth  spec list. What we are looking at is a 1.2GHz dual-core TI OMAP 4480 CPU with a modest 1GB of RAM and 8GB of internal storage which can be expanded via the trusted SD card. The box also comes with other functionality options like the GPS , compass, gyroscope and accelerometer. Using the box may be a bit tricky at times for those who are acclimatized to the capacitive touchscreens, but trust me when I tell you, the control box does a stellar job, compared to the on glass controls of Google Glass.

Coming to the possible applications of the BT200, well, there is really not much you can do as of now, as the product is not exactly world ready, as I already mentioned many times before. However, Epson has included a few trial software for those who want to experience the BT200. The Android Play Store is visibly missing, but Epson claims that its on the way, along with their own dedicated app store. But that doesn’t mean that you can’t run any apps on this device ( Sideload the APKs for now ) . A few of the international models come pre loaded with Netflix and a few other entertainment applications to give you an overall feel of the various aspects and capabilities of the device. Though movie viewing is not really its forte, the BT200 does a decent enough job of letting you watch mobile videos, while the earphones bundled in the package give you a nice immersive experience. Again, all these are just for your reference, and I am pretty sure that the future iterations of the BT200 will come with better in-built features and media capabilities as well.

All in all, the Epson Moverio BT200 is a stellar example of where the Augmented Reality technology is headed, but it’s not really a device that you should own right now. Sure, the BT200 costs almost half of what the Google Glass comes for, but its still a device that is in Beta form, and has little or no consumer applications as of today. However, if you are someone who is passionate about new and upcoming technology, and want to get a taste of Virtual Reality at a modest price considering the competition, you should definitely keep an eye out for the BT200.