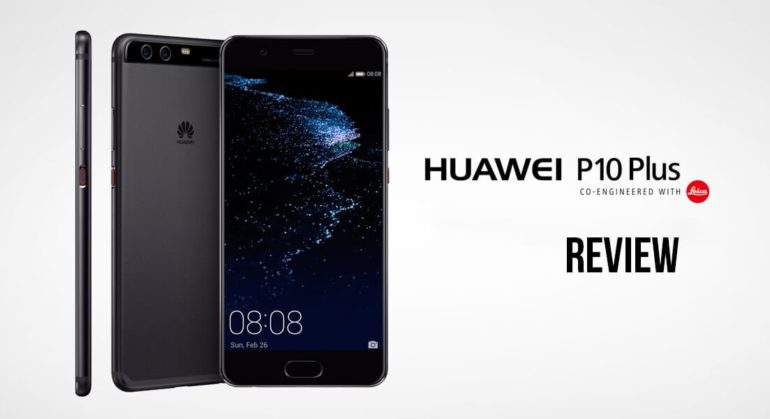 When the Huawei P10 Plus was unveiled at the MWC this year, it sure turned a lot of eyeballs. It had a fresh design, was not too heavy, and had the innards to support the hardware. Back then, it felt as if the P10 Plus was here to rule, but with the growing months, competition has increased, and now, the P10 Plus faces a tall order if it has to maintain its spot among the top. Huawei has been striving to get that winning combination in its smartphones and in this review, we will see if the Huawei P10 Plus is the answer to the company’s prayers. Before diving into the review itself, lets take a  quick look at what the Huawei P10 packs :-

If you look at the bullet points above, you will notice that Huawei has out in a lot into its camera departments and off late have been touting the very same with all their smartphones. We shall see if their cameras are worth the hype as the review progresses.

DESIGN and DISPLAY :- Ever since Huawei shed the ascend monicker, their design and build have received a significant bump up. The P series is Huawei’s attempt to show the world that they are not out of the race just yet. The P10 and the P10 Plus have both received royal treatment from the designers at Huawei in the sense that that the device is truly premium to look at and thanks to its various available finishes, it is very very premium to hold. As of today, the P10 Plus is available in almost 10 different colour options – Ceramic White, Dazzling Blue, Dazzling Gold, Prestige Gold, Graphite Black, Mystic Silver, Rose Gold, and Greenery. While not all options are available everywhere, it is good to see Huawei give such a wide catalogue to its customers. capping off the design area is the back camera setup and casing. The P10 Plus features the Leica co engineered dual camera setup with no camera hump whatsoever. While bigger phones like the iPhone and even the Galaxy lineup have struggled with the camera bump, the P10 Plus has got it absolutely spot on. Also, Huawei has gone a step further and replaced the usual plastic protection for the cameras with gorilla glass 5. On the front end we have the beautiful 2.5D curved display which works beautifully with the aluminium unibody . The P10 Plus also comes with an IPX3 certification, which means its splash proof, but the phone will not hold up if immersed or exposed to running water.

Coming to the display, the P10 Plus features a 5.5 inch IPS-NEO LCD display with a 1440 x 2560 resolution. While this looks good on paper, there are some ghosting issues with the display on the P10 Plus. There are also some issues with the screen’s response times as well. The display brightness settings are also not consistent, since, at the lowest settings, the content on the screen is hardly visible. Also, scrolling through emails or other content leaves a visible halo effect on the screen. The issues however have been encountered in many new phones today and it seems to be more of a manufacturing defect than anything else. Otherwise, the display unit works pretty fine for its billing.

Sunlight legibility is pretty good, especially for an LCD. The P10 Plus remains perfectly usable outdoors – a strong case in favour of IPS NEO panel after the above-average contrast with relatively deep blacks.

Overall, the P10 Plus isa powerhouse in terms of design, and for someone looking for a looker, this model is a must consider. Display wise, maybe they could have gone for a better display unit, but the job is done decently so I guess its alright for now.

BATTERY :- The Huawei P10 Plus is powered by a strong 3750 mAh unit which is non removable. Huawei has also provided a fast charger capable of outputting 5V/4.5A, 4.5V/5A, and 5V/2A, with the maximum power of 22.5W. Low voltage ratings also allow all the internal components to remain cool during charging. The problem with Huawei’s fast chargers is that they couple the adapter with a cable. mixing and matching usually doesn’t give you the results you expect, so make sure you use the right cable with this fast charger or you run the risk of charging your phone at regular speeds.

As far as the efficiency of the fast charger goes, the P10 Plus can be charged from 0 to 50% in 30 minutes, which is pretty good.

PERFORMANCE and UI :- The Huawei P10 Plus runs on Android 7.0 with their custom EMUI 5.1 running on top. The designers at Huawei have definitely put in some effort this time around and have really pushed  out a refreshed version of the EMUI . Everything from the lock screen to the little features have been tweaked and refined and while you cannot experience the lock screen if you choose the fingerprint scanner, one respite is that the scanner is blazing fast and you probably ill be impressed with that to notice the lock screen anyways.

Coming to the performance front, the P10 and the P10 Plus are powered by the in house Kirin 960 chipset. The main processor within the chipset consists of a quad-core Cortex-A73 cluster clocked at 2.4GHz, plus a quad-core array of the familiar Cortex-A53 cores, clocked at 1.8GHz. The Cortex-A73s boast a 30% power efficiency compared to the previous A72 design, while also promising improved performance. While this sounds and looks good on paper, the processor is still not among the best in the market. It is only a matter of time before Snapdragon comes out with their new iteration and the Kirin will get blown out of the water. Benchmark scores also show that the Kirin does get a bit outpaced by the likes of the Apple hurricane cores.

CAMERA :- The Leica branding has been adorning the best of the best Huawei’s devices to date and the P10 and the P10 Plus take the legacy forward in some style.The basic formula remains the same – a 20MP monochrome sensor and a 12MP RGB one, the latter complete with OIS. The difference comes down to the lens. The P10 plus ups the ante with a brighter and faster, f/1.8 Leica SUMMILUX. In theory, the P10 Plus should give you higher quality photos with better corner details and also a better pronounced bokeh effect.

All in all, the P10 Plus uses the extra room to capture at a better exposition than the P10, but at a lower ISO. This results in less noise and the monochrome shots had better exposed shadows due to its wider dynamic range. All the samples have come out with vibrant colours, excellent and abundant detail and textures were rendered in a very natural way.

Coming to the selfie front, Huawei has not left any stones unturned. The Huawei P10 Plus is equipped with an 8MP f/1.9 front-facing snapper, complete with the Leica branding. Even though it is still fixed focus, it sounds great on paper and is an improvement over its predecessor, the Mate 9.

The image quality is great. The colors are nice, detail is abundant, the photos are sharp and exhibit excellent dynamic range. We also get some beautification filters in case we want to go crazy with the selfies.

All in all, Huawei have lived up to their hype in terms of the camera by giving us the best in the business. All I can say is, go ahead and experience it for yourself.

CONCLUSION : – The P10 Plus is a very strong offering from Huawei, featuring a stellar design, decent display, refreshed UI, latest Android and an excellent camera and battery. I did not include the chipset here because I believe they can still improve on that front. There are many users out there who are performance buffs and when they see the snapdragon 835 smoking the competition, the transition is going to be immediate. In that case, the camera setup will not really matter. So its time for Huawei to rework their chipset and come back stronger in their next device.