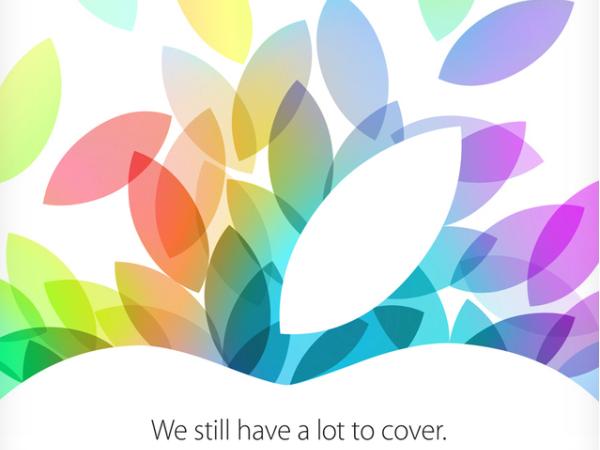 The Next Generation iPad and iPad Mini to be Unveiled 22nd October.

The next generation of Apple iPads is rumoured to be hitting stores in the late autumn. Although Apple haven’t stipulated an official release date it’s thought that the fifth generation iPad and the second generation iPad Mini will be unveiled on the 22nd of October.

Speculation is always rife when it comes to new Apple products and especially so when a rumoured release date draws near. The fourth generation iPad and iPad Mini hit stores in autumn 2012 with no major design changes from the previous iPad generations. However, the iPad 5 is expected to have design changes and should be lighter and thinner than earlier full-sized tablets.

Other changes to the fifth generation could include dual speaker grills located either side of the lightning connector port, with volume controls on the side casing. An upgraded camera has also been rumoured with both the iPad 5 and the iPad Mini 2 progressing to eight megapixels with an increase in the size of aperture. The 9.7” sized iPad 4 screen is likely to remain the same for the iPad 5.

A processor upgrade is expected for the fifth generation iPad and the new iPad Mini. Apple almost always release the next generation with a speedier processor, usually stating it will be double the speed of the previous models. The iPad 5 is expected to include the 64-bit A7X chip with additional RAM and an upgrade to the A6 processor is expected for the iPad Mini 2. The just released Apple IOS 7 is likely to be the new operating system for both models.

The new processor should help to improve the battery life in both versions and the fingerprint Touch ID capability seen in the iPhone 5 is likely to be included.

Thinner, lighter and quicker seems to be the general consensus for what to expect from the new iPad. Apple is of course not about to reveal specifications of their new tablets until the launch event. However, with major changes from previous generations seeming likely, these tablets will undoubtedly be the biggest sellers for Christmas 2013.