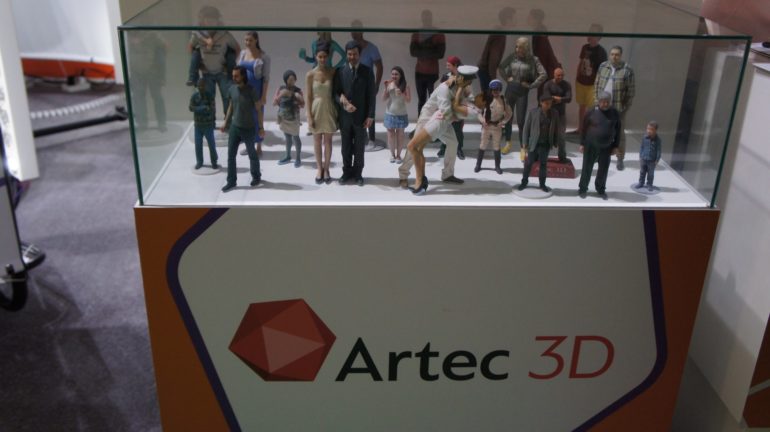 Artec 3D, a global market leader in 3D scanners unveiled the world’s first high-speed full-body 3D scanner for 3D portraits for the first time in Dubai. Artec Shapify Booth was at Dubai Entertainment Amusement & Leisure Show (DEAL) 2015 from the 14th to the 16th of April, and enabled customers to experience 3D technologies firsthand in a way that was easy, fun and affordable. DEAL, now in its 21st edition, is the Middle East’s most anticipated event of the year and annual focal point for all stakeholders in the amusement and related industries. The booth received keen interest and phenomenal feedback from the large crowds of consumers at the show, who got the firsthand experience of the technology.

Artec Shapify Booth includes 4 wide view high resolution 3D scanners which rotate around the customer, built-in lighting system, a high speed processor and 3D modeling software. The Booth scans customers in only 12 seconds; in 5 minutes a detailed 3D model is created automatically, and in 15 minutes, the high-quality 3D-printable file is completed. These high-precision scanners, used in the aerospace, medical and manufacturing industries to guarantee quality control, capture even the slightest specifics, down to wrinkles on clothes. Now with Shapify Booth and its accompanying user-friendly software, the scanners can be controlled by simply pressing one button.

Ideal for venues such as theme parks, shopping malls, outdoor and indoor attractions, the Shapify Booth is perfect for capitalizing on existing customer flows and drawing new ones. 3D “shapies” can be taken of customers in graduation robes, wedding attire, and at other significant moments in life, such as during pregnancy.

“We were thrilled to be given the opportunity to present our Shapify booth in the United Arab Emirates.The Shapify booth has been significantly popular in Asia, the U.S. and Western Europe, and we are thrilled to be sharing our 3D technologies with consumers in the Middle East. Although 3D technology, specifically 3D printing, is widely heard of in the news, it has not reached the stage where it is easily accessible to the average consumer. We aim to change this and believe the Shapify Booth can become many people’s first interaction with 3D technologies. Through Shapify booth, we also endeavor to showcase the opportunities that 3D scanning and printing technology presents to enterprises and companies in the Middle East”,said Artyom Yukhin, president and CEO of Artec 3D.

Artec’s highly sophisticated software automatically merges together hundreds of generated images to produce a full-body 3D image file ready for 3D printing, without any post-processing. Finally, the digital model is then sent to a 3D printing center to make a full color mini-statue which can be delivered to or collected by the customer.

The Shapify Booth was on stand o24 Arena and Sheikh Saeed Hall 1. Artec 3D along with their local partner Jackys Business Solutions L.L.C.

“We are the authorised partner for Artec 3D in the GCC for over a year and we’ve started marketing Artec handheld scanners. It was great to collaborate for their first Shapify Booth in the UAE. We are optimistic that ‘Shapie’, 3D version of your body will take the ‘selfie’ concept to the next level.  As 3D printing and scanner suppliers, we are in a position to give a complete proposition to clients in the region,” said Ashish Panjabi, COO, Jacky’s Business Solutions L.L.C.